Car Window Repair Brandon Jeep Liberty 2002-2007.  The 2002-2007 Jeep Liberty has a problem with the Power Windows. The original bracket was designed to screw on to the metal cable and would strip out. The replacement brackets (now made in the USA) are designed as part OF the cable and are much smoother and better made. The new brackets will not break again.

There are two tubes on each side of the regulator that the metal cable travels in. These are usually fine. If the tubes are broken you will need to replace the entire regulator. If you try this yourself use caution when removing the regulator assembly from the door. Trickier than most.

There was a split in the body style and the mid 2006-2007 may have a different bracket installed than the earlier models. ALSO, years ago if you had a problem with the late 2006-2007 and took the Liberty to a Chrysler dealer they would have replaced the regulator AND the glass to fit it for the 2002-mid 2006 style. You could have either bracket inside your door,  If you are local (Tampa, Pinellas, Pasco, Manatee, Sarasota) we can come to your home or business to fix this problem today or tomorrow. Repair takes less than one hour.  If you are outside our area feel free to call anyway if you need any advice. 727/410-9995  Car Window Repair Brandon Jeep Liberty 2002-2007 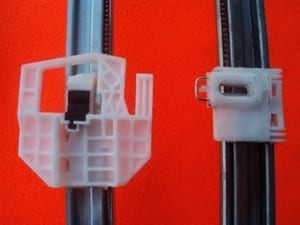 Want to try this yourself? We sell these brackets on our parts web site below,